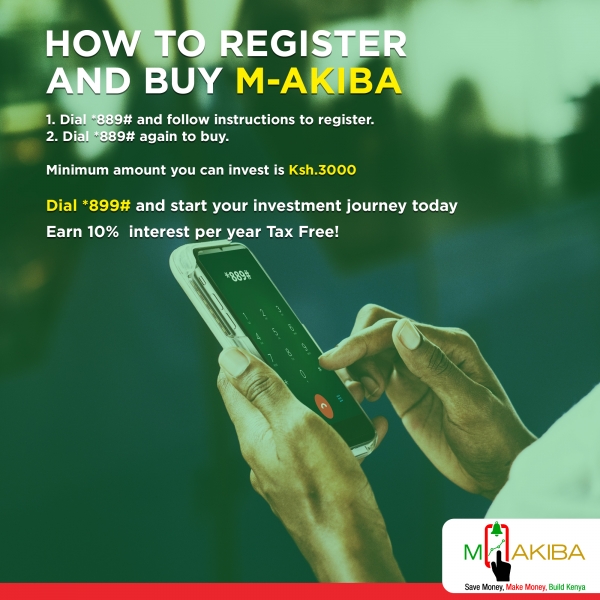 The National Treasury (TNT), the Central Depository and Settlement Corporation (CDSC) and the Nairobi Securities Exchange (NSE), have jointly launched the re-open of the M-Akiba Retail Infrastructure Bond Issue MAB/2/2017/03.
The re-open will offer Kenyans another opportunity to invest in the Government Infrastructure Bond. This is the third re-open of the Bond since the first Issuance in 2017.
The Bond is scheduled to run from Monday, August 19, 2019, to Friday, Midnight September 6, 2019 and seeks to raise Kshs. 500 Million (Five Hundred Million Kenyan Shillings).
This follows the successful uptake of the Bond in May 2019 which attracted 75% subscription rate, representing Kshs.187 million against a target of Kshs.250 Million.

To date, the M-Akiba bond has raised a total of Kshs.782 million. The structure of uptake for the Offers has been more or less the same with about 68% of Kenyans taking up bonds worth between Kshs.3,000-20,000, while 24% of the investors bought bonds worth between Kshs.20,001-100,000, and the remaining 8% invested above Kshs.100,000. CDSC on behalf of the National Treasury has paid out a total of Kshs. 67 million to investors as interest income.
CDSC hosts over 500,000 M-Akiba CDS accounts.